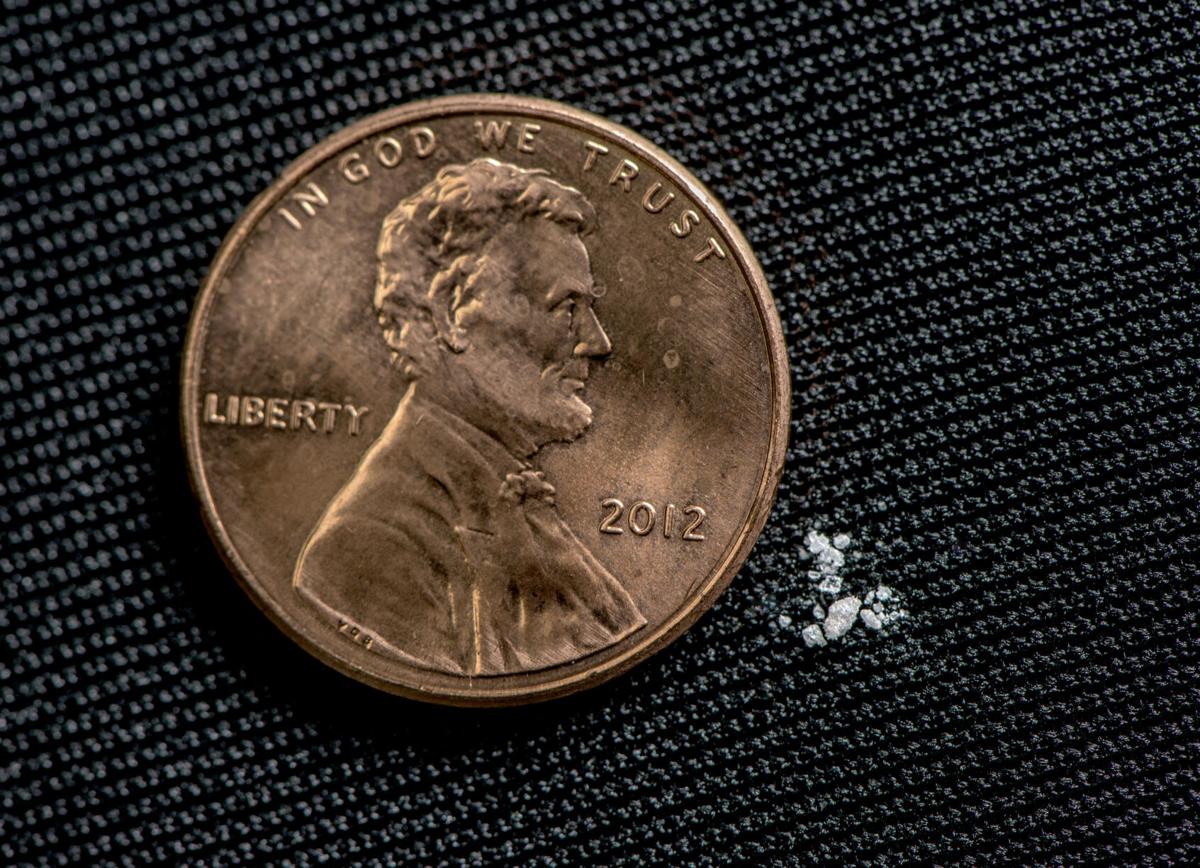 The white powder on the right of the above penny is all the synthetic fentanyl that’s needed to kill a person. 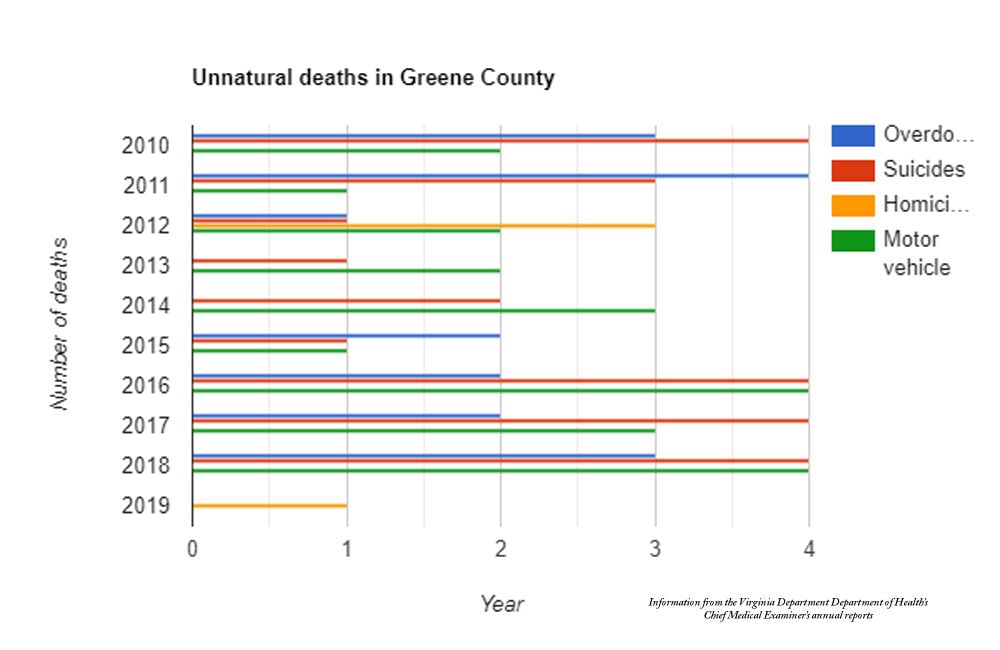 This is the third and final story in a series on illicit drugs in Greene County. Story one is here and story two is here.

While violent crime in Greene County has decreased by 8% across the past decade, the number of narcotic violations from 2011-2019 rose by 96% per capita, according to a recent report by the Jefferson Area Community Criminal Justice Board.

Neal Goodloe, a criminal justice planner with the board, noted in the report—recently shared with the Greene County Board of Supervisors—that in the past 20 years the county has seen a 442% increase in the number of felony narcotic cases requiring drug analysis by a state lab, compared to a 25% increase in population during that same time frame. He said the increase was largely the result of cocaine, methamphetamine and opioid drugs.

“Greene County has the typical drugs that any other neighborhood has,” said Capt. David Roach of the Greene County Sheriff’s Office. “We’re fighting it. We’re doing something about it under (Sheriff Steve Smith’s) administration. We’ve had the highest number of the most serious cases resolved through arrest than in history.”

Kathrin Hobron, statewide forensic epidemiologist with the Virginia Department of Health’s Office of the Chief Medical Examiner, said fatal drug overdoses have been the leading method of unnatural death in Virginia since 2013.

In Hobron’s quarterly fatal overdose report, published in January 2021—with numbers through the third quarter of 2020—Virginia is on track for a record-breaking number of fatal drug overdoses by more than 600. Fatal drug overdoses increased on average by 101 year over year from 2011-2019.

“Opioids have been the driving force behind the large increases in fatal overdoses since 2013,” Hobron said in her report.

Greene is no different than anywhere else in the state. In 2020, there were roughly 29 events coded as overdoses through the sheriff’s office and four were fatal, Roach said.

“We don’t really have a good way of tracking all overdoses,” Roach said. “A lot of them don’t come through (our office). They might show up in the emergency room even if it happened here. But for the number of overdoses in Greene County, that’s still bad.”

When an individual is addicted to drugs, that drug becomes the number one thing in their life—acquiring it and using it is a compulsive behavior they have no control over, no matter the consequences to themselves or those close to them.

Marijuana and alcohol are still the number one substances Roach sees in his office, but beyond those, methamphetamine is the number one drug they see in Greene, with cocaine second, including a crack re-emergence. Following those are heroin and fentanyl, he said.

Virginia decriminalized marijuana last year, making it a civil crime with a $25 fine if found in possession of a personal use amount. The current General Assembly recently approved the legalization of marijuana for adults over 21 years old, and is working on finalizing the details at this time.

But, Roach said they are still prosecuting the dealers of marijuana. There was a case in 2020 that involved 50 pounds of marijuana and large sums of cash, which was the largest amount of packaged commercial weed in the office’s history.

In November, Oregon voters approved Measure 110 to decriminalize the possession of all drugs. The drugs are still against the law—as is selling them—but possession is only a civil violation. Virginia has not mentioned doing anything similar.

One argument for decriminalizing these possession cases is that that funding will be put toward mental health and substance abuse counseling rather than the courts.

Roach said bringing possession charges after an overdose on the hard drugs helped get an individual treatment, but that’s not permitted any more.

“The argument is that once they’ve taken it, they are no longer in control,” he said.

Greene County Commonwealth’s Attorney Edwin Consolvo said his goal is treatment for individuals who are addicted to drugs.

“My goal is what tools can we provide that will help you into recovery? Get you back into the community? Because we love you and we want you to be with us and healthy and happy and sober—and I add a little joke at the end—and paying taxes,” Consolvo said.

Consolvo and Roach both said it’s imperative the community understand these drugs are here.

“We look bad on paper, considering our population, but we’re not lying about our facts. There are other counties twice our geographical region with the population much higher and they’re saying they don’t have (a drug problem),” Roach said. “What good does it do to stick your head in the sand and say ‘I don’t have the problem?’ Other people are not making any arrests or not writing reports on it, (but) they still have the problem.”

Drug infractions are listed as “crimes against society” on the state police’s annual Crime in Virginia report.

Roach said he could sit in his office with blinders on, but drug addiction leads to more, including violence.

“Drugs erode society and they erode you as an individual,” Roach said. “If you look at us as a whole and in wide sweep in terms of family members, I’d venture to guess that the majority—if not all—families have someone suffering from substance abuse, some kind of addiction. It erodes families.”

“It’s why we fight,” he said. “It’s so hard seeing what drugs bring. But you can’t arrest your way out of a drug problem.”

Youths are trying drugs younger and younger. In 2018, an estimated 31.9 million Americans aged 12 and older were illicit drug abusers, according to the 2019 National Survey on Drug Use and Health. This estimate represents approximately 12% of the population aged 12 and older.

According to the 2019 Monitoring the Future Survey, about 47% have used an illicit drug by the time they leave high school and about 8.5% of eighth-graders, 20% of tenth-graders and 24% of 12th-graders are current users.

If you wait to talk to your child about drugs until they’re in middle or high school, it may be too late. The 2016 Surgeon General’s Report titled “Facing Addiction in America” showed that 70% of those who try illicit drugs before age 13 develop a substance-use disorder within seven years, compared with 27% of those who try an illicit drug after age 17.

Last year, the Culpeper County Sheriff’s Office presented a program called “Hidden in Plain Sight” at William Monroe High School to inform parents about what to look for when it comes to their children and drugs. Similar programs were scheduled to be held by the Greene County Sheriff’s Office but the coronavirus pandemic put everything on hold.

The program identified everyday items that could be in any teenager’s room that could hide drugs and drug paraphernalia, such as a teddy bear with a hidden Velcro pouch under its sweater or a fake water bottle with a hidden compartment under the label. DVD cases that could hide needles and “gum wrappers” that were actually rolling papers for joints were also displayed.

“Parenting is a lot different than it was back in the day,” Roach said. “Kids are starting to use at younger ages and that’s why education is so important.”

“You have to be invested in them and ask them about their day, what’s going on—not in a prying way, just what’s going on,” he said. “And be genuine. They’re not adults yet, but they are on their way and you’re trying to give them the tools to be successful.”

He added that a lot of drug dealers are adding fentanyl to other drugs, including marijuana, and when you take a drug you really have no idea what is in it. Fentanyl is a pain reliever that is roughly 100 times more potent than morphine and 50 times more potent than heroin, according to the 2020 Drug Enforcement Agency’s Drugs of Abuse report. Just a drop is enough to kill a person.

“It’s like playing Russian roulette, but you’re not putting the bullet in, somebody else is, and you don’t know how many bullets are in or what type of bullet it is,” Consolvo said. “Do you shoot yourself into an overdose but you’re able to come out of it? Or is it the one where you drop dead?”

Roach noted that the younger the individual, the more impact doing drugs has on their growing brains.

“Children’s brains are still developing and if they smoke weed, it affects them on a long-term basis and changes their brain. It doesn’t affect adults like that,” he said. “And Ritalin in children is beneficial when they have ADHD, but it’s mini-cocaine for adults.”

Roach said he’d like to see people advocate for tougher laws, but also said parents need to pay attention to what’s going on at home.

“I would advocate for structure in a home,” he said. “Get serious about what’s going on. A lot of times the family knows about it and turns a blind eye to it because they don’t want it to be in their family.”

Consolvo said until he became a prosecutor he had never seen any hard drugs.

“One focus has to be on (encouraging kids) to understand the importance of who you surround yourself with,” he said. “Be present and let them know that you’re there.”

Virginia ranks 40th in access to mental health care in the United States, according to the Community Mental Health and Wellness Coalition in Charlottesville. The coalition is a network of organizations in the city of Charlottesville and the counties of Albemarle, Fluvanna, Greene, Louisa and Nelson, working to improve mental health and substance use service access and outcomes. The coalition has developed a campaign called Help Happens Here (helphappenshere.org) and its website offers information on such services in the community:

Shifflett will plead not guilty in killing

The 17-year-old charged in the death of a 21-year-old woman appeared in Greene County Circuit Court Tuesday morning.

Greene County again has a voice on the Rapidan Service Authority’s (RSA) Board of Members, as of Feb. 18, after the board voted unanimously at…

Boy charged in shooting death to be tried as an adult

The 17-year-old Greene County youth charged in the death of a Charlottesville woman will face trial as an adult, according to the Greene Count…

Planning for the yearly budget is a complex process—made even more so this year due to added expenses and federal funding relief, both due to …

Real estate assessments up 9% in 21

Creekside gets OK to start early

Board of Supervisors approves proffer updates

The Greene County School Board held a public hearing Feb. 10 on the fiscal year 2022 budget. No one from the public signed up to speak during …

When residents were asked 10 years ago to describe what they love about Greene County, rural was the most-used word, according to a word cloud…

The white powder on the right of the above penny is all the synthetic fentanyl that’s needed to kill a person.