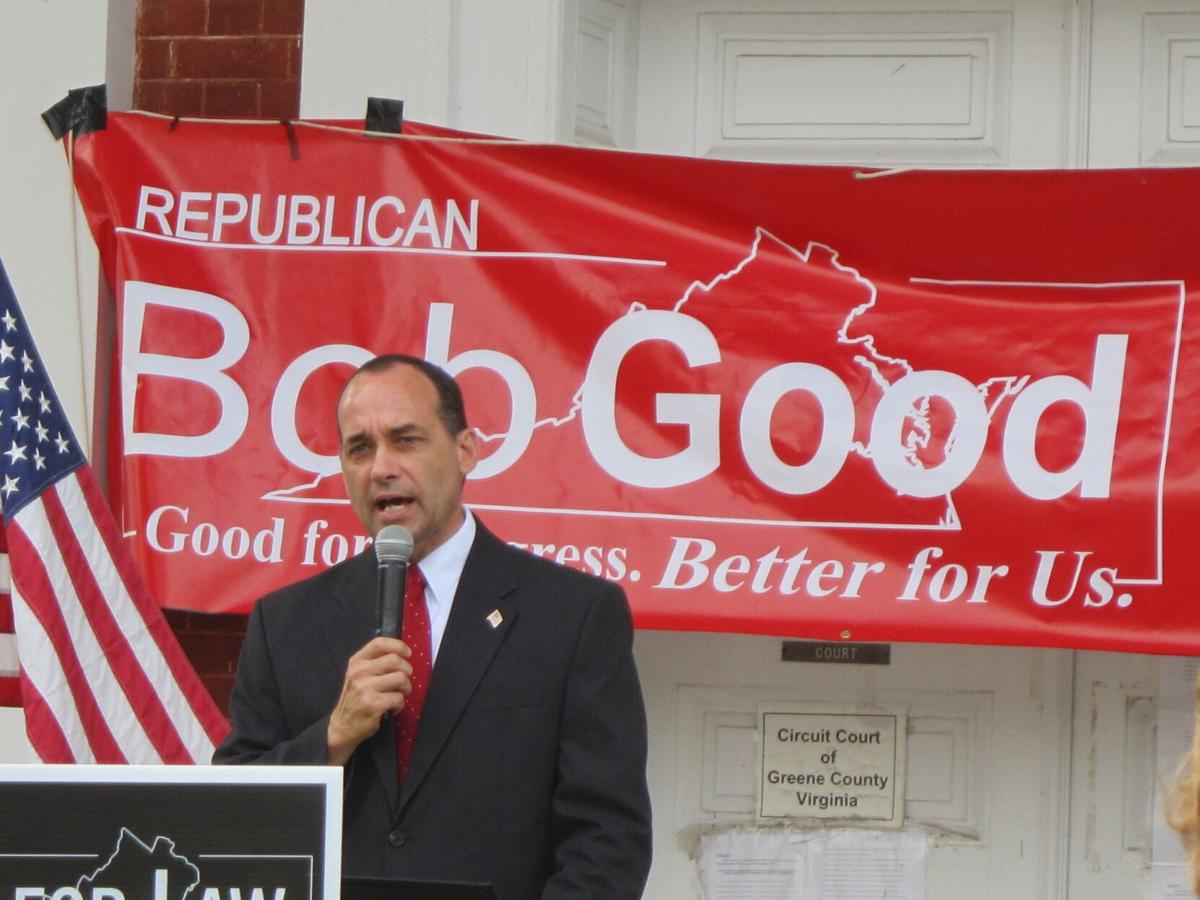 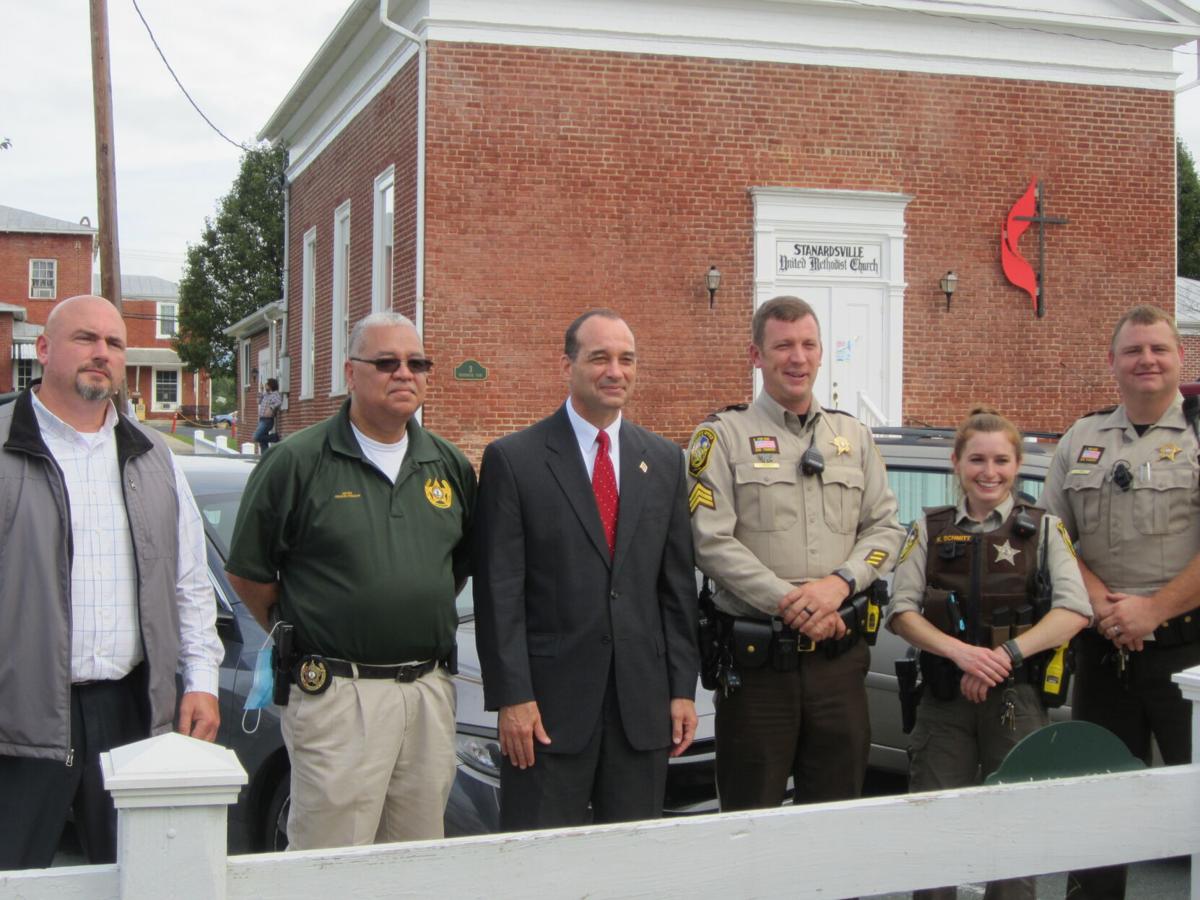 Bob Good, third from left, stands with several deputies from the Greene County Sheriff’s Office on Thursday, Sept. 10, in Stanardsville. Good stopped in Greene as part of his tour through the 5th District in support of police officers. 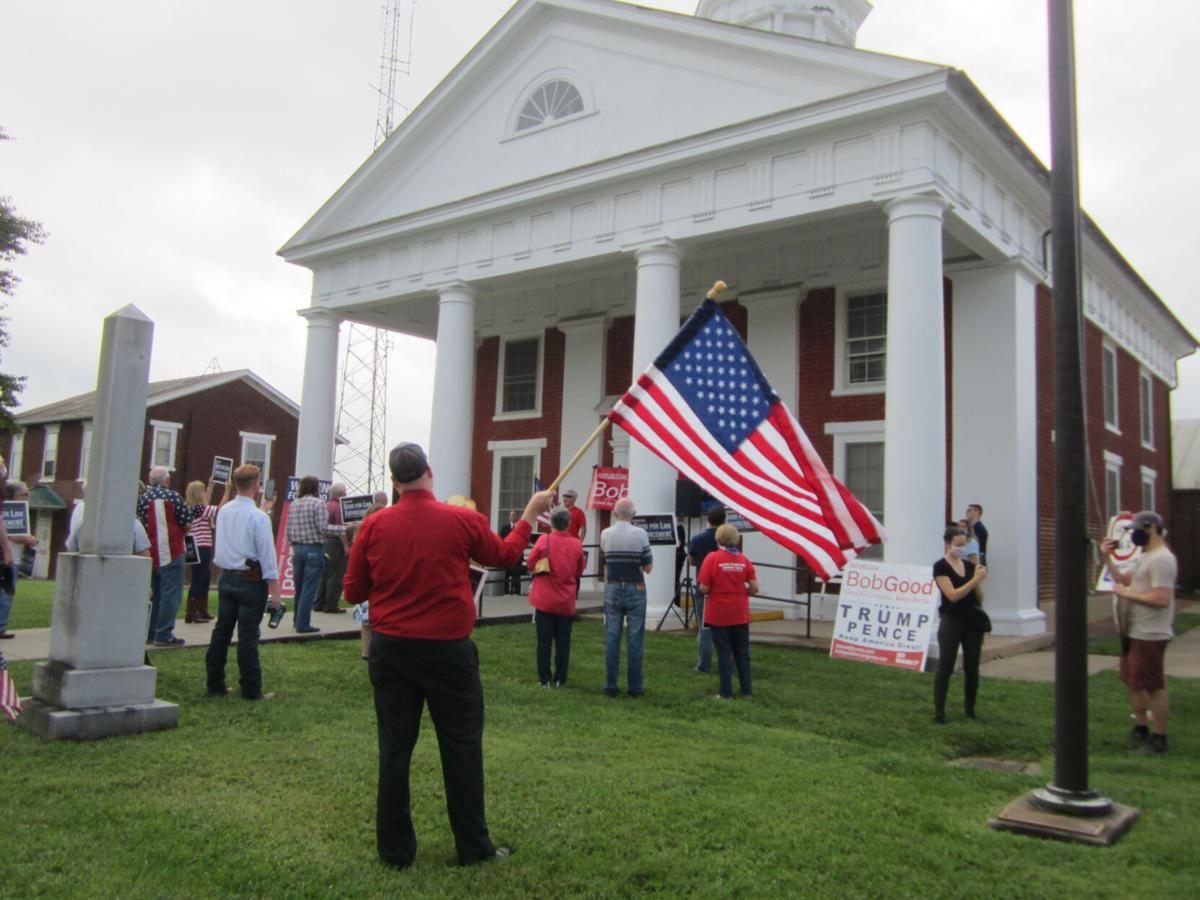 An audience member at the Stanardsville rally waved an American flag as Good spoke from the courthouse steps. 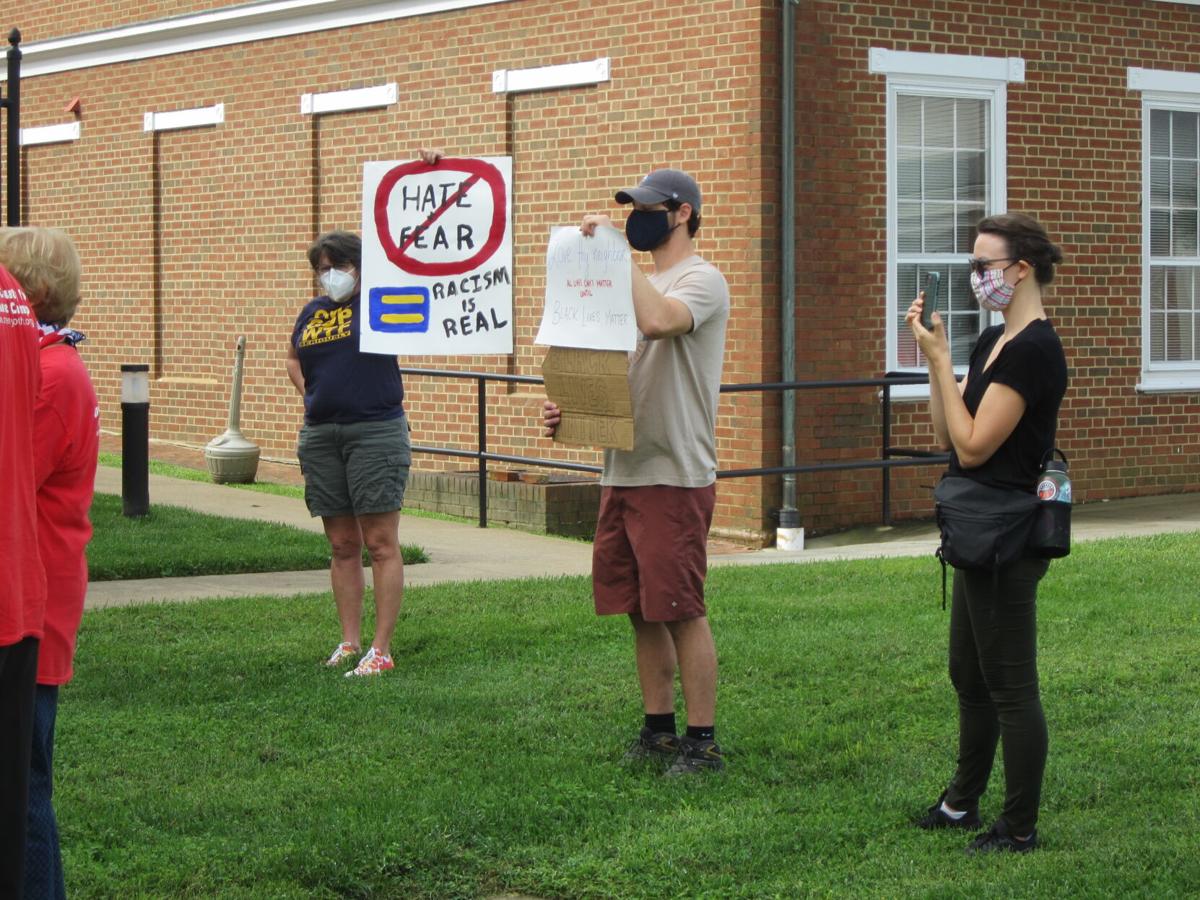 Less than a handful of protestors showed up for the rally.

Bob Good, Republican 5th district nominee for Congress, held a campaign rally in support of law enforcement on the steps of the Stanardsville courthouse on Thursday, Sept. 10.

Roughly 25 people gathered, the majority of which were not masked, to hold signs and wave flags as the national anthem was sung by Stanardsville resident Bert Nye, pledge of allegiance was recited and prayers were said by Pastor Wendell Lamb ahead of Good’s speech.

A former Campbell County supervisor, Good graduated from Liberty University in 1988 and worked in banking for 17 years before accepting a position with his alma mater in 2005. During his time in Campbell County, he was known for vocal support of public safety and the second amendment, according to his website.

Sherman reminded those in attendance to make sure they are registered to vote and to take advantage of the ability to vote early in person at the registrar’s office.

“You never know what could happen on voting day,” she said. “We were told this morning by the registrar’s office that there’s a trailer they are setting up for early voting in person, so we’re urging you to vote in person and you can do that here at the trailer starting Sept. 18 and going through the end of October, and we’re urging you to take somebody with you when you go—take a carload, go out to lunch or something afterwards—but go vote early to make sure your vote is in and that it counts.”

“The number one job of government I’ve often said is to keep us safe, and on the federal level, that looks like what our president has done with building up our military and building up our respect and our strength in the eyes of the world,” Good said. “The way he has confronted foreign nations and reined in those who wish us harm and made us less dependent on foreign nations for essential things and the way that he has worked to secure our borders … the number one role of government is to keep us safe; if we’re not safe, nothing else matters.”

Good called to mind the 19th anniversary of the Sept. 11 terrorist attacks and how those events shone a spotlight on the importance of first responders in our communities.

“Tomorrow we will recognize the anniversary of the day where that rang true, perhaps more than any time in our lifetimes, the importance of those heroes—those first responders, those who rush in when the rest of us are rushing out, those who go to work every day not knowing what that day will hold, not knowing if they’ll come home the same way they left that morning.”

Good said that he believes the current climate of racial unrest, coupled with protests and riots, are being fueled by the Democratic Party.

“We’ve watched for months now … the violence, the rioting, the lawlessness, the attacks on innocent civilians, the destruction and burning and looting of property … and in these Democrat-run cities, these Democrat governors … letting it go unchecked, refusing to support the local law enforcement,” he said.

Good refused to respond to questions from several RISE (Resist Injustice-Stand and Educate) protestors who asked for evidence to support these claims. The three protestors were holding signs at the back of the rally and attempted to ask for clarification after Good’s claims about unchecked rioting but were cut off.

“The Democratic Party, including my opponent, has marched with the radical (Black Lives Matter) movement, the movement that wants to destroy and tear down our country; that has called for the elimination of the police,” Good said in response to the protestors. “If you’ve not been on their website to see what they truly stand for, the anarchy—these trained Marxists who are trying to implement socialism in our country—trying to destroy our country.”

“My opponent stands with the radical BLM movement,” Good said. “Now he doesn’t like it when I say he wants to defund our police … he wants to reduce the funding or reallocate the funding, and I tell you we need more funding, more support for our police officers and better pay.”

Webb is an internal medicine doctor and director of health policy and equity at the University of Virginia.

Good ended his speech on a patriotic note and drowned out attempted request for response from the protestors with more patriotic music while posing for photos with the local law enforcement personnel in attendance.

“We stand with President Trump,” he said. “We stand with our law enforcement and we say ‘thank you’ for having our backs every day. We’ve got your back today.”

Good held eight rallies over the past week, from Bedford, Appomattox and Buckingham counties on Sept. 8 to Greene and Fauquier counties Sept. 10 and Pittsylvania, Halifax and Mecklenburg counties Sept. 15.

Bob Good, third from left, stands with several deputies from the Greene County Sheriff’s Office on Thursday, Sept. 10, in Stanardsville. Good stopped in Greene as part of his tour through the 5th District in support of police officers.

An audience member at the Stanardsville rally waved an American flag as Good spoke from the courthouse steps.

Less than a handful of protestors showed up for the rally.