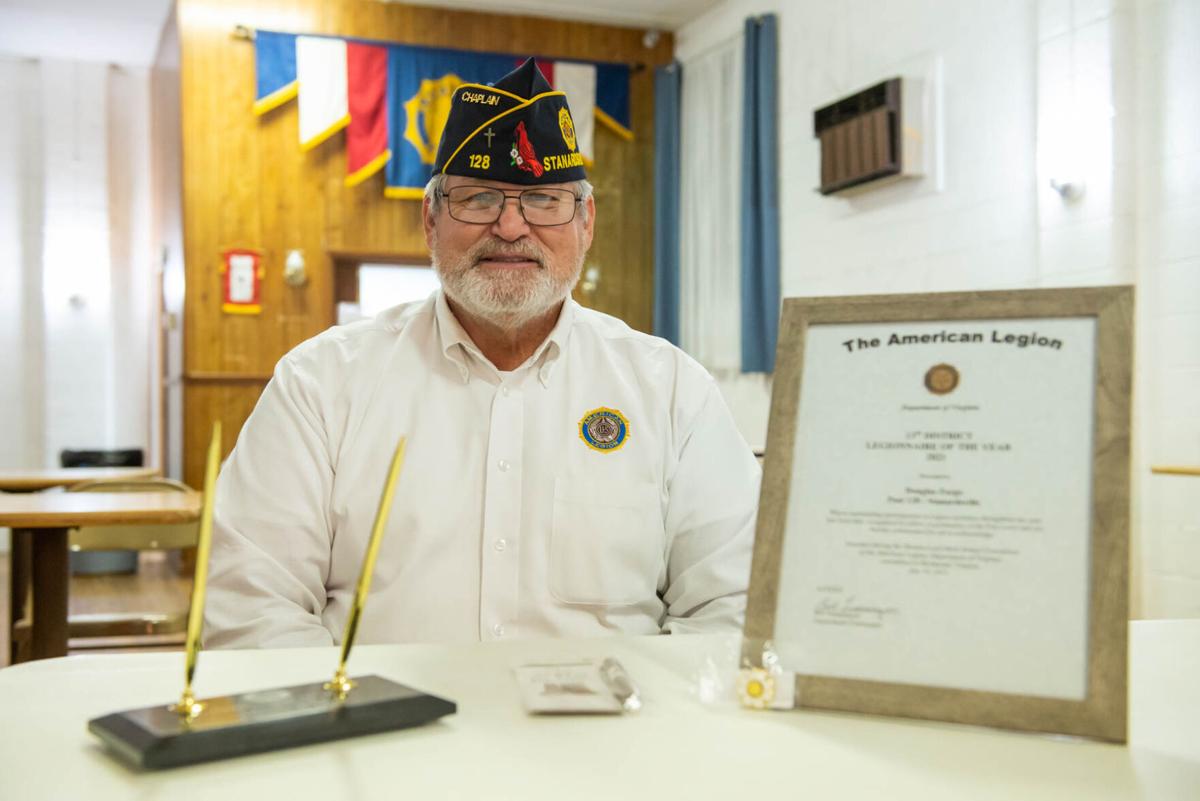 Doug Fargo was awarded Legionnaire of the Year for American Legion Post 128, for District 13, and for the Northern Region during a ceremony last week. 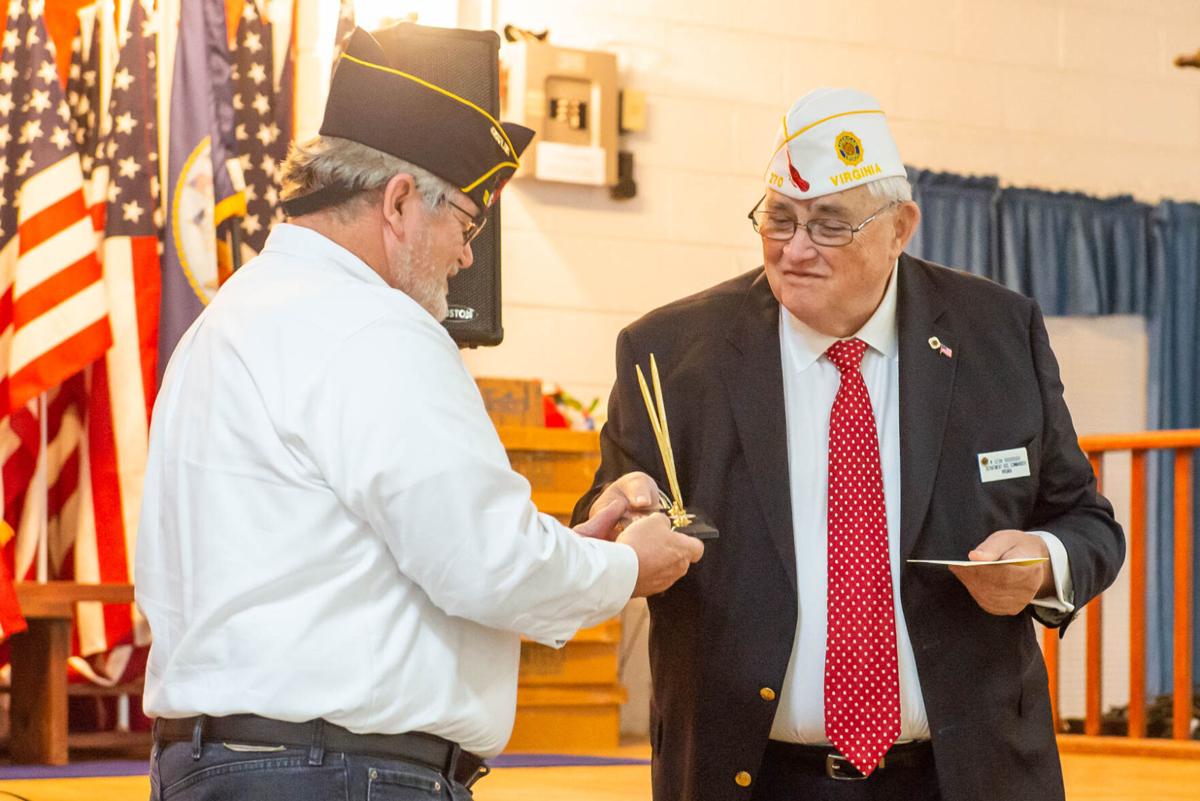 W. Glenn Yarborough, Vice Commander of the American Legion Department of Virginia, awards Doug Fargo the Legionnaire of the Year award for the Northern Region.

American Legion Post 128 Chaplain and Treasurer Doug Fargo was honored as Legionnaire of the Year last week—not only for Post 128, but also District 13 and the Northern Region of Virginia.

“This is so richly deserved,” DeForth said as he called Fargo to the front of the room. “Doug has been through a lot of adversity in his life and he has gone through it gracefully. He’s probably one of the most powerful chaplains in this organization. He’s been indispensable in so many ways. He’s been responsible for the Memorial Day ceremonies and is now responsible for part of the Veterans Day ceremony. And his prayers are legendary.”

There are roughly 35,000 American Legion members in Virginia and the majority of those are in the Northern Region, DeForth noted.

Fargo said he was humbled when he learned he was to be recognized.

“I’m just a regular guy doing regular stuff,” he said. “I was just really humbled that not only would DeForth put me in for it but that I’d actually get it.”

Fargo served 14 years active duty as an artillery officer in the U.S. Army after serving in the Corps of Cadets at Virginia Tech. He had three children with his first wife, Elizabeth, and the family moved often, doing one three-year stint in Germany. It was after the Gulf War that Fargo volunteered for an early separation and the family moved to Virginia.

“I thought it might be a good opportunity and I voluntarily separated from active duty in 1992,” Fargo said.

At first he had difficulty finding a full-time job, so he submitted his paperwork to rejoin the military but found a job around the same time. Instead, Fargo served in the National Guard for another two years.

It was after his son’s death that Fargo became involved with American Legion Post 128, he said. It was member Norman Slezak who recruited him.

“Norm Slezak reached out to me but I wasn’t really in the right mindset at that moment and I was taking care of Libby and I wasn’t able to take on anything else,” Fargo said. “I was a member because Norm paid for my membership for the first few years, but after Libby died and I married Cindy I became a more active participant in the Legion.”

For Fargo, one of the best things about the Legion is the camaraderie with other guys who have served—in different branches and in different eras.

“We just lost our only World War II veteran—Haywood Lawson,” he said. “The majority are Vietnam veterans and up through the Gulf War, but not many current war veterans; that’s something we’re working on. It’s just a mix of veterans that have been through the same things even if it was different eras. You can support each other and support the community.”

Helping the veterans from the region is important to Fargo.

“I took over as chaplain in 2014,” he said. “I wasn’t a chaplain in the Army or through the Red Cross, but I’m a Christian. I saw there was a need for that. The chaplain runs the Memorial Day ceremony every year and that’s another way that I contribute back to not only the veterans and families, but the community as a whole.”

Judge Advocate A.B. Brown, of the American Legion Department of Virginia, presented Fargo with a certificate, as well, for being Legionnaire of the Year for District 13.

“You don’t just get the badge for one year of work,” Brown said. “It actually is the culmination of a couple years—maybe even three years—where you do outstanding work and are always diligent; someone who is always around and giving over and above. And it’s great that we can recognize that.”

“He is just tremendous and he’s been through so much adversity; I mean this is a real soldier,” Yarborough said.

Yarborough said he’d like to see membership numbers grow across the state.

“The important thing is taking care of veterans,” Yarborough said. “They don’t have to be in the Legion, but if they’ve served our country, let’s take care of them.”

Yarborough also shook hands and presented a special Vietnam pin to those who served during that era. And each time told them, “Welcome home.”

“Most of us when we came home from Vietnam weren’t treated too well,” he said. “In fact, we were treated awful and if you’d been more than once you learned to change your clothes so you’d look like everybody else … and you didn’t put on a uniform until you got there.”

Fargo thanked all the representatives for the honor.

“It’s humbling to be recognized by your peers,” Fargo said. “I want you to know that I really appreciate being in the American Legion. I’m so grateful to be amongst you and a member of your organization and want us to continue to move forward with providing that service by helping each other and by helping our community.”

A Greene County man pleaded not guilty in Greene County Circuit Court on Monday, Nov. 29, to 14 charges in relation to allegedly harming his t…

The Planning Commission voted unanimously to recommend to the supervisors denial of a rezoning in Ruckersville. It is scheduled to go before the Board of Supervisors Dec. 14. The property is still zoned for 600 homes under its current Senior Residential zoning.

November School Board and BOS updates

What started in a college dorm room entered a new phase last week with a groundbreaking for a new Performance Signs facility. The new facility…

Planning Commission voted to recommend denial of Rural Enterprise Centers. The concept is scheduled to go before the Board of Supervisors on Dec. 14.

The Greene County Sheriff’s Office arrested a Manassas Park man Friday and charged him with rape and object sexual penetration, according to a…

County employees may get bonuses

Public hearing scheduled for Tuesday regarding this possibility.

Doug Fargo was awarded Legionnaire of the Year for American Legion Post 128, for District 13, and for the Northern Region during a ceremony last week.

W. Glenn Yarborough, Vice Commander of the American Legion Department of Virginia, awards Doug Fargo the Legionnaire of the Year award for the Northern Region.