Subscribe
Read Today's E-Edition
Share This
Is a plague of locusts next? What to know about the 17-year cicadas about to arrive
0 Comments
Share this
1 of 2 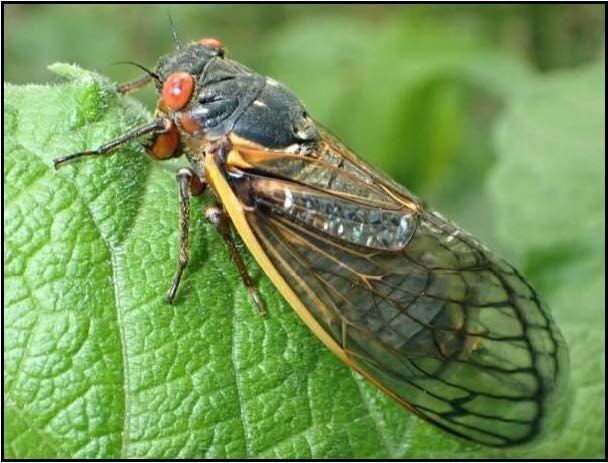 Brood X 17-year cicadas will be arriving in May. 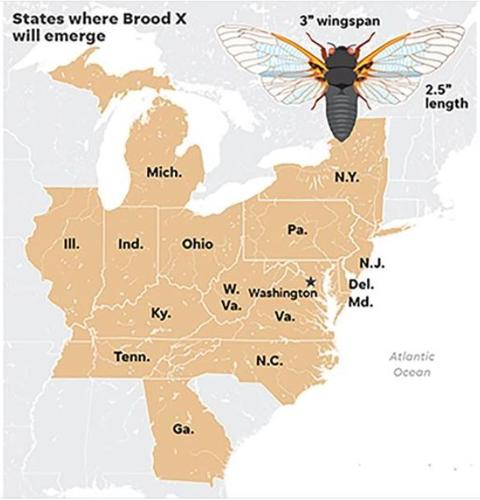 The famed “Brood X” of the 17-year cicadas are due to emerge from their long slumber in the coming month, but they are probably not coming directly to Greene County, according to historical records. And no—they’re not actually locusts. According to the Virginia Cooperative Extension (VCE), the name ‘locust’ actually refers to migratory grasshoppers, although the huge swarms of large flying insects known as cicadas can certainly resemble a proverbial “plague of locusts” to those who may not have experienced it before.

“The Brood X that is supposed to hatch this year isn’t reported to actually be hatching in Greene, although they are in Albemarle—not sure how that works,” said Sarah Sharpe, Greene County Cooperative Extension Agent for Agriculture and Natural Resources.

One of the world’s largest swarms of giant fly-like insects, billions of these critters will emerge across much of the Eastern United States this spring—including in the Virginia counties of Frederick, Clarke, Loudoun, Fairfax, Arlington, Shenandoah, Warren, Fauquier, Prince William, Page, Rappahannock, Augusta and Albemarle—so although Greene County is not listed, it is highly likely Greene residents will experience some of these noisy nuisances during the course of the summer due to their close proximity.

According to a recent VCE publication on the soon-to-be-expected visitors, periodical cicadas are about 1.5 inches long—with a 3-inch wingspan—and feature a black fly-like body with red eyes and orange legs. Adult periodical cicadas have clear wings with distinctive orange veins, while the smaller and far less populous annual cicadas have dark green bodies with dark eyes and legs.

Annual cicadas, also known as the “dog-day” cicada, harvestfly or jarfly, are related to the periodical cicada and usually emerge in late July and August. They have two- to five-year lifecycles, but their broods often overlap, so they are seen in small numbers every year in mature, well-established deciduous trees.

These insects date back 3.9 million years, but the different broods first emerged about a half-million years ago. Twelve of the broods emerge every 17 years and three emerge every 13 years. A small number of dog-day cicadas appear yearly and some periodicals have been known to emerge early when the climate shifts, but these are largely eaten off by predators.

“Cicadas are not poisonous and do not bite or sting, but adult periodical cicadas can be shockingly loud during their mass emergence; communities and farms with large numbers of periodical cicadas emerging from the ground often have substantial noise problem due to the males ‘singing’ or calling for the females,” according to VCE.

Luckily, this ruckus only lasts about four to six weeks.

After the cicadas tunnel their way up out of the ground, they will perch on a tree or other vertical structure and shed a thin shell—coming out in full color with the telltale orange eyes and wings. The males then start to belt out their mating song by vibrating membranes on their abdomen, while the females sit back and silently spectate.

“We are at the epicenter of an event that happens nowhere else on the planet except here in the Eastern United States,” said University of Maryland entomologist Mike Raupp, who travels the country giving speeches on cicadas. “It’s going to be pretty remarkable come the latter half of May.”

According to Raupp, there could be as many as 1.5 million cicadas per acre in parts of Northern Virginia and Washington, D.C., in late May; their mating song can be up to 100 decibels—that’s the same as a chainsaw, lawnmower or a jet flying overhead.

The males die after mating, and the females stick around just long enough to attach as many as 400 eggs to the branches of the trees. Once the eggs hatch (six to 10 weeks later), the nymphs fall to the ground and dig down 6-18 inches to where they will spend the next 17 years attached to the tree’s roots, feeding on sap.

When will they arrive?

When the ground warms to 64 degrees, the immature nymphs stop gnawing on tree roots and start burrowing toward the surface. In Virginia, this is expected to begin in early May with numbers peaking in early June, according to VCE. Georgia and other southern states may have started to see their cicadas as early as the end of March, but they are not as numerous as those in Virginia, Maryland and D.C., according to the U.S. Forest Service.

Brood X is one of the largest of the fifteen named broods in the U.S., but there are several others that impact parts of Virginia. Brood II last emerged in Greene County in 2013 and will next be seen in 2030. Brood I was seen in many neighboring counties—such as Page, Rockingham, Augusta and Nelson—in 2012 and will emerge again in 2029. Other broods that emerge in Virginia include: Brood XIX—a 13-year variety expected near the East Coast in 2024; Brood XIV, expected in the far southwest in 2025; and Brood IX, seen last year in southwest Virginia and next expected in 2037.

“I think the major brood in (the Charlottesville area) is Brood II, but it would not surprise me if you experienced Brood X in Northern Virginia in 2004, as it is common in the D.C. area,” said Doug Taylor, Commonwealth Professor of Biology with the University of Virginia. “The distinctions can be a bit fuzzy and sometimes there are stragglers.”

In Virginia, both the 17- and 13-year cicadas damage many species of ornamental and hardwood trees, according to VCE. “Oaks are commonly attacked, but the most seriously damaged plants are newly-planted fruit and ornamental trees such as apple, dogwood, peach, hickory, cherry and pear.”

The VCE recommends against planting new fruit or ornamental trees the same year as predicted cicada emergence if possible. If you have already planted or are concerned for the welfare of your trees, you can cover them in fine netting, secured around the trunk to protect the thin twigs from egg-laying females. This netting can be removed at the end of June. It is not recommended to use insecticides, as these have limited effect on cicadas and treating blooming trees or plants can kill off pollinators and other beneficial insects.

As the female splits small (1/4- to 1/2-inch diameter) twigs to lay her eggs, she can cause enough harm to kill these twigs. This is called “flagging” and you can remove the dead twigs from your premises promptly to prevent the nymphs from nesting in the roots of your trees. Larger and more well-established trees are not likely to be unduly harmed by the small number of twigs impacted.

Although cicadas do not bite or sting, they are not the most graceful fliers. While swarms of actual locusts can travel up to 80 miles per day, cicadas don’t often go very far from where they were hatched. After spending the majority of their lives underground, the fresh air and wind are unfamiliar, and cicadas often find themselves bumping right into trees, walls or humans out trying to get from place to place as they seek the best place from which to demonstrate their vocal talents.

Many wildlife enjoy feasting on cicadas. Birds, squirrels, chipmunks, skunks, ants, raccoons, snakes, frogs and possums will gorge themselves this summer with plenty of cicadas left over. It has been said that copperheads are especially fond of the rare delicacy, so take care when out in the woods during cicada mating season to avoid startling these venomous reptiles as they enjoy their feast.

Dogs also enjoy eating cicadas—or crunching on the crispy shells left over on short trees or ornamental grass—though it is not recommended to allow your pet to eat too many of them. However, many human cicada enthusiasts over the years have perfected the art of eating cicadas—the University of Maryland “Cicadamaniacs” group even went so far as to put out a “Cicada-Licious” cookbook in 2004 which can be found at www.tullabs.com/cicadaworld/cicadarecipes.pdf and includes instructions for making cicada dumplings, cicada stir-fry, chocolate-covered cicadas and even cicada-rhubarb pie.

Where can I learn more?

If you’re not so keen on trying out a cicada salad, the rare brood emergence phenomenon can still be an interesting science lesson for young kids, and a wealth of information and lessons exist online, including recordings of the different species’ mating songs.

The “Cicadamaniacs” was formed in 2004 at the University of Maryland, and their website www.cicadamania.com has everything you need to teach a kids’ science lesson as well as many videos and local maps and frequently asked questions. Cicadacrewumd.weebly.com also features merchandise for the 2021 Brood X emergence—everything from facemasks to T-shirts, stickers and baby clothes commemorating the event.

For detailed maps and listings of when and where each brood will emerge, visit the University of Connecticut website at cicadas.uconn.edu/broods. There is also a free smartphone app called Cicada Safari where you can upload photos of cicadas along with their location to help students at Mount Saint Joseph University in Connecticut map out future broods for study.

For a copy of the VCE publication on cicadas or for information on protecting your trees and plants from cicadas, contact Sharpe at the Greene County Extension Office at seweaver@vt.edu or (434) 985-5236.

Brood X 17-year cicadas will be arriving in May.