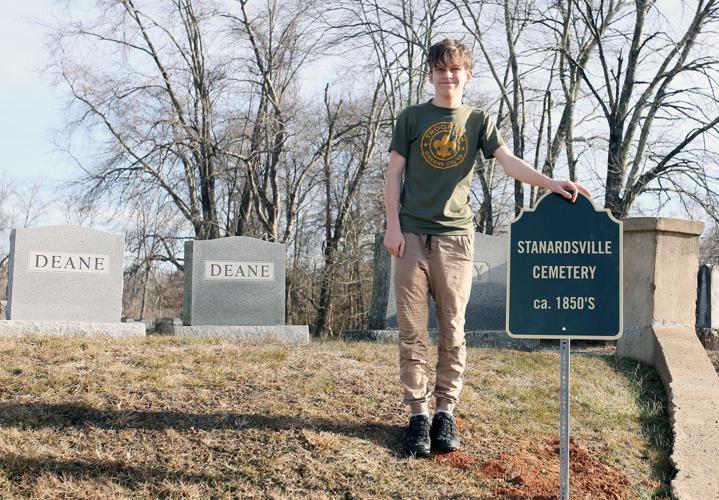 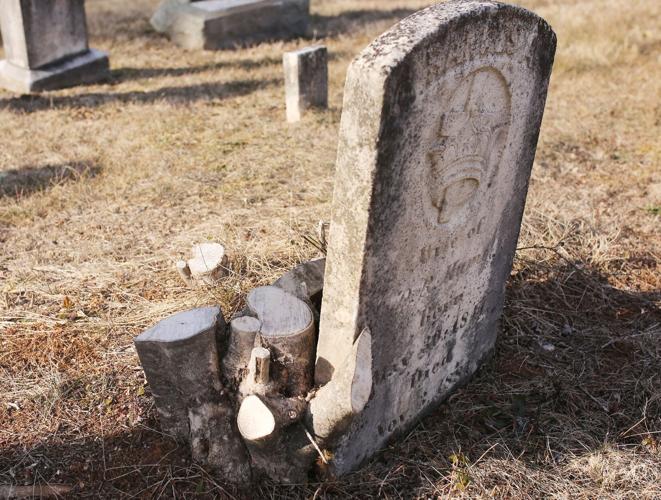 Plant growth was practically on the tombstone.

The historic Stanardsville Cemetery was recently given a bit of a facelift as part of Stephen Gump’s Eagle Scout project.

The circa-1850s cemetery has held numerous names in its history. It was originally the Sorrille Cemetery, then the Prospect Hill Cemetery during the Civil War, according to the Greene County Historical Society graveyard survey, Volume III. In copies of the 1920s Greene County Record, the cemetery was known as the Woodson Cemetery, according to the survey. The oldest known stone is Virginia Sims, who was born Oct. 2, 1805, and died Oct. 13, 1856.

There are roughly 768 graves in Stanardsville Cemetery, including numerous unmarked and fieldstone marked sites, but it’s unknown who is buried there.

“Stanardsville was actually started in the late 1700s, but who all is in the cemetery, we don’t know,” said Eugene Powell, treasurer of the Stanardsville Cemetery Association.

Gump, a scout from Troop 174, cleared truckloads of brush, fixed crumbling walls, fixed the fence and put up a sign at the entrance noting the cemetery’s known beginnings.

“I learned the importance of delegation,” Gump said of the project process. “And you should always make sure you bring the tools you need because we didn’t have enough loppers and stuff like that.”

Gump said he received help from other scouts on workdays, as well as his family and others. In total, the project took 172 work hours to complete.

He also took photos of the graves and added them to the site findagrave.com for sites that were not already on there.

“I like nature and stuff so becoming an Eagle Scout just seemed so natural,” Gump said. “Plus, all three of my older brothers became Eagle Scouts.”

The Greene County Historical Society sponsored the project, getting permission from the Stanardsville Cemetery Association for the work to be performed.

“I would come in here every birthday and Father’s Day and Mother’s Day and this place was just a mess,” Joann Powell said. “There were boxwoods growing up, trees growing up all around. But, coming in today it was real pretty. You can see the entire cemetery.”

Gump said he would recommend scouts to anyone.

While there are many steps to earning an Eagle Scout award, Gump said the goals are clearly set out, but “you have to do the work yourself.”

A couple years ago, Gump participated in a 50-mile hike at a high-adventure base called High Knoll.

“Each day I’d hike and do a different activity,” he said. “I hiked to a range and I rode horses around; that was fun.”

Gump said he plans to study something with animals or botany in college.

Joann Powell said Troop 174 has plans to take on the cemetery as a perpetual service project to help keep the plant growth at bay.

Some of the overgrown boxwoods were completely covering grave stones, Gump said. Others had trees growing right next to stones that could topple the stones if allowed to continue to grow.

“The scouts did a beautiful job,” Eugene Powell said.

Unfortunately for the cemetery association, the only source of income comes from donations and a $50 internment fee from funeral homes when someone is buried. All the plots have already been purchased and there are roughly 768 sites. That leaves little funding to maintain the cemetery. It costs more than $300 a year just for the mowing of the grass.

Eugene Powell said it has been a struggle to find people to participate on the board, as well.

“It’s an old cemetery and it doesn’t have much money in its perpetual fund, especially now with interest rates what they are,” he said. “The Blakeys had taken care of the cemetery for many years and once they passed away there are only four of us on the board.”

Gump said he’s glad to have finished his project.

Plant growth was practically on the tombstone.