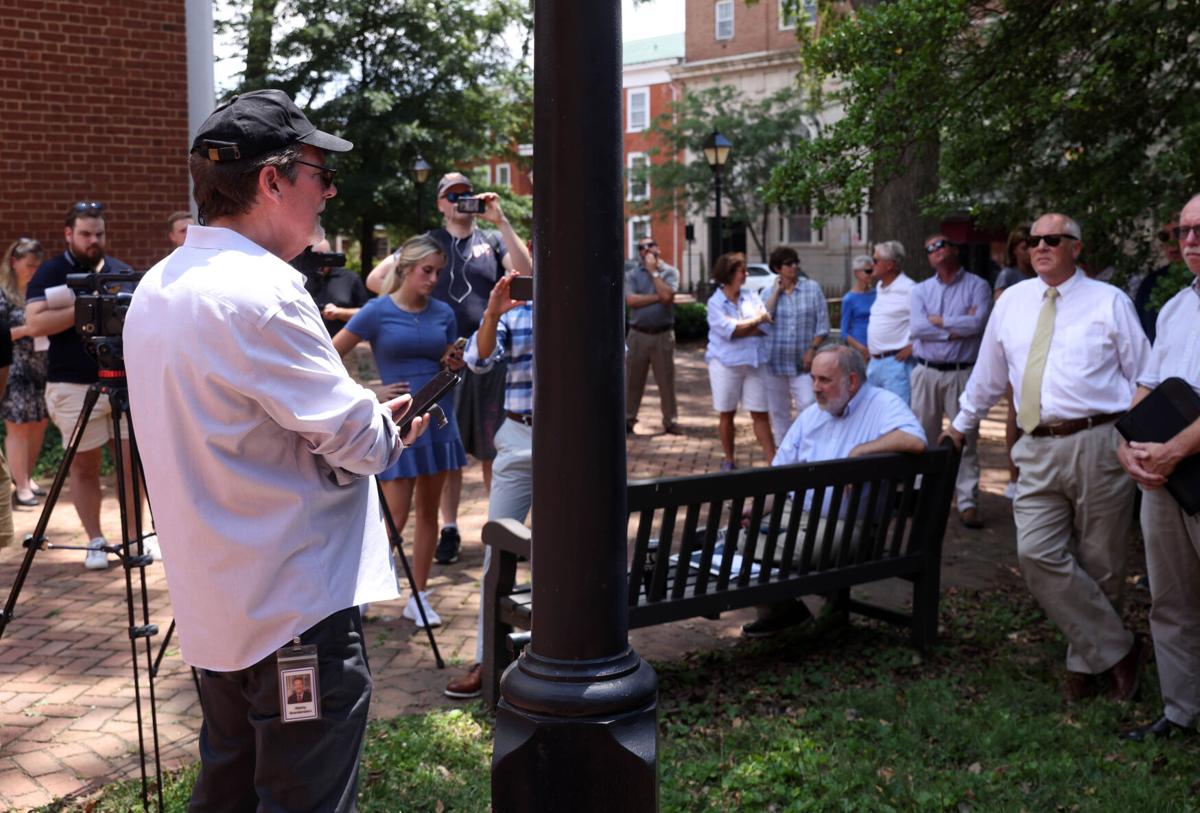 Appointed trustee Henry Brandenstein leads the auction sale of Charlottesville Fashion Square mall outside the Albemarle County Circuit Courthouse on Friday. The highest bid, of $20.2 million, went to the mall’s lender, whose representative won the auction via phone. 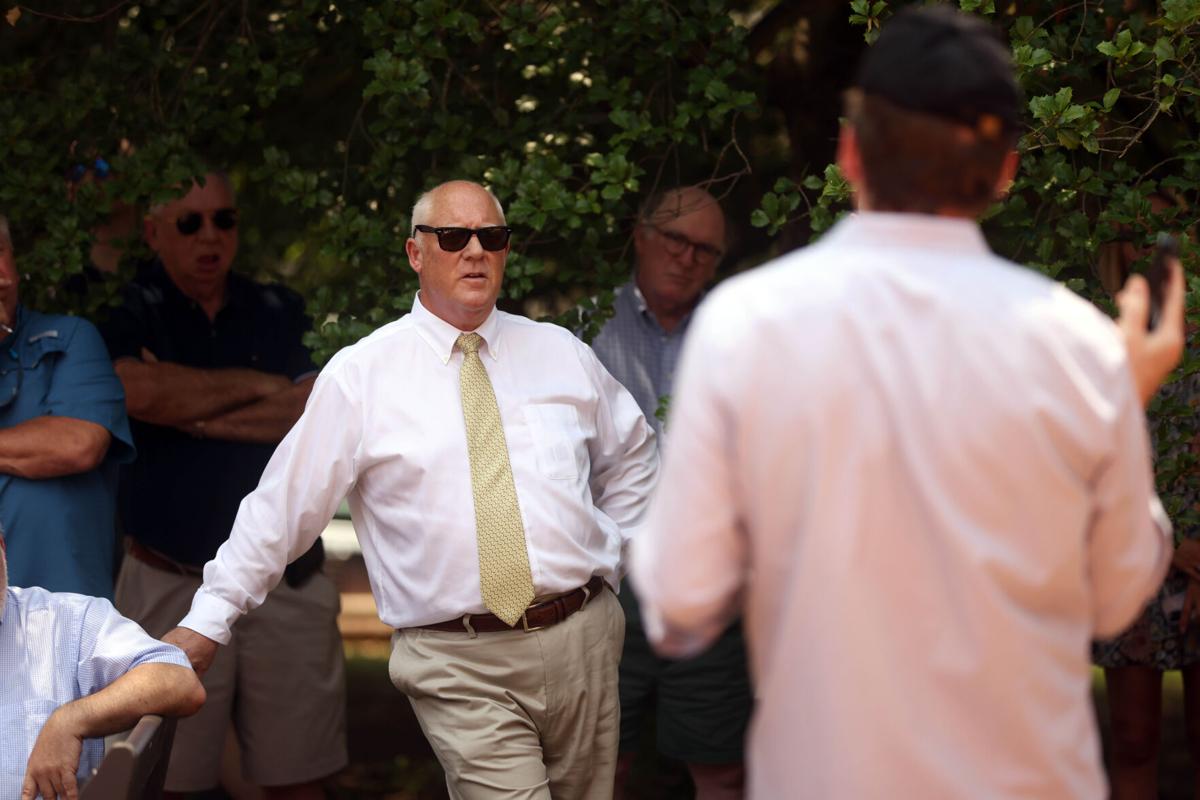 Richard Hewitt, left, places a bid with Brandenstein during Friday’s auction. Hewitt is associated with Seminole Trail Management, which purchased the JC Penney site in the mall in September for $4.5 million.

After years of decline and financial uncertainty, Charlottesville Fashion Square mall sold for $20.2 million on Friday to the mall’s lender during a foreclosure auction outside the Albemarle County Circuit Courthouse.

Hewitt is associated with Seminole Trail Management, a local property management company that purchased the 10.17-acre JC Penney site in the mall in September for $4.5 million.

Though it was not immediately clear which organization the lender represents, according to the State Corporation Commission Clerk’s Information System, the limited liability company is registered to the same Kansas address as Midland Loan Services, the special servicer for Fashion Square.

As the crowd gathered to watch the auction in sweltering heat, it wasn’t clear if the perspiration pooling on onlookers’ foreheads was a product of the temperature or anxiety.

Hewitt and the lender, whose representative attended via a phone held by the auctioneer, bid back and forth for about 20 minutes.

The opening bid was set at $5.3 million by the telephonic lender, which was quickly met by $5.3 million and one-one-hundredth by Hewitt. From there, the auction became a game of quick one-upmanship between the two parties, as each bid was quickly met with another that was $100,000 higher than the last.

With bated breath, the crowd watched the two parties engage in the auction, with occasional construction sounds permeating the quiet from the nearby ongoing removal of the Thomas “Stonewall” Jackson statue base.

After bidding $20.15 million, Hewitt announced he would not raise his offer again. After a short gap of silence, the lender raised the bid to $20.2 million, effectively ending the auction.

The auction was the latest, but likely not final, event in the mall’s tumultuous recent history.

A casualty of declining brick-and-mortar retail sales and other market forces, Fashion Square has been losing stores for years, with the COVID-19 pandemic only making matters worse. In June, Washington Prime Group Inc., which owns the mall, minus the JC Penney site, filed for Chapter 11 bankruptcy protection.

The move came after reports earlier this year that the company was preparing a potential bankruptcy filing after it skipped an interest payment on its debt.

The company owns stakes in 102 properties, but Fashion Square in Albemarle County is one of five properties Washington Prime Group no longer operates, as it’s in receivership.

Fashion Square has been classified as one of Washington Prime Group’s non-core properties since 2019. The company has been working to remove the mall from its assets.

In late 2019, the mortgage loan secured by Fashion Square was transferred to special servicing because, due to the loss of certain tenants, “the borrower notified the lender that future projected cash flows will be insufficient to ensure future compliance with the mortgage loan,” Washington Prime Group said in its most recent quarterly report.

After a request by Midland Loan Services, the special servicer for Fashion Square, a judge in March 2020 approved the appointment of Krista Freitag as special servicer. Freitag then hired The Woodmont Co. to manage and lease the property.

Woodmont continues to manage and lease the property, which has lost J. Crew Factory, American Eagle, Zales and many other stores in recent years.

According to commentary from Trepp LLC, a New York-based commercial real estate data and research provider, the mall backs the $44.8 million loan, which is split across two commercial mortgage-backed securities deals.

Albemarle County approved a small area plan for the area around the intersection of Rio Road and U.S. 29 in 2018. The plan helps to serve as a guide for future decisions around redevelopment of the area, including the mall property.

It remains to be seen whether the mall will be sold again now that it has been repurchased by the lender. Representatives from the University of Virginia and its foundation have repeatedly said they are not planning to buy the property.

Appointed trustee Henry Brandenstein leads the auction sale of Charlottesville Fashion Square mall outside the Albemarle County Circuit Courthouse on Friday. The highest bid, of $20.2 million, went to the mall’s lender, whose representative won the auction via phone.

Richard Hewitt, left, places a bid with Brandenstein during Friday’s auction. Hewitt is associated with Seminole Trail Management, which purchased the JC Penney site in the mall in September for $4.5 million.