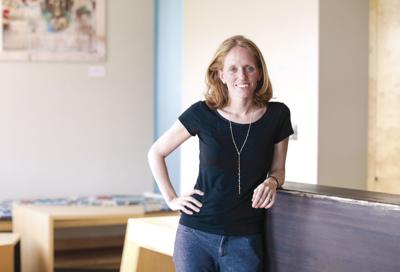 The 37-year-old executive director of the Cville Bio Hub has helped launch successful area bio technology businesses by focusing on the business side of the industry, even though her undergraduate degree and doctorate are both in biomedical engineering.

“I didn’t start out to do this,” Hastings laughed. “I was really interested in the tech of what we were doing, but when other options became available to me I said ‘yes.’ There were problems to solve in turning the research into a business, how to grow that business and how to make it successful. When I was asked if I’d take on those duties, I said ‘yes.’”

Hastings leads the Cville Bio Hub in its effort to support the area’s more than 50 biotechnology companies as well as entrepreneurs moving research out of the laboratory and into the marketplace and attracting other firms to the region.

The organization was created to offer advice and to connect with the firms, many of which have similar market niche issues to address even though they do not directly compete with each other.

The hub’s goals are familiar to Hastings. She helped HemoShear grow from University of Virginia research into a viable company by taking on the tasks of equipping laboratories, finding qualified employees and providing training.

That role spun out of her work with company principals as a graduate student doing research.

“It was an amazing experience. I had thought that I’d go back to North Carolina to the Research Triangle Park area where I got my undergraduate degree [at North Carolina State University],” she recalled. “Then I got married and my husband was working on his graduate degree through the Curry School of Education. My co-advisor said they were commercializing the technology and creating HemoShear and asked if I want to get on board and I said ‘yes.’”

With HemoShear, she researched and contacted vendors, established administrative and human resources, researched information technology and whatever was needed to bring the company out of school and into the workaday world.

Notably, none of those tasks were part of her college degree coursework.

“I found myself as sort of liaison between the business side and the research side and I really got into that,” she said. “I would find myself sitting down with investors and auditors and working with the scientific side. I enjoy being involved in making positive outcomes.”

She also agreed to act as a go-between for her company, other companies, the general public and local schools.

“There was so much going on in the biotech industry but no one really knew about it. At that time, about 2012, there were around 40 different companies in bio technology working on different projects,” she said. “It was my mission to bring what we were doing to the people in the community. We would give tours and I’d see students getting inspired by the technology and the labs and you could see their eyes light up.”

After nearly eight years with the company, she took the job of chief operations officer for Contraline, a biomedical technology firm created by UVa researchers looking into non-hormonal and non-surgical methods of male contraception.

“We spent a long time reinventing the wheel with payroll, lease negotiations, developing waste disposal and finding a cleaning crew, all of the things that go into the business side of a research company,” Hastings said. “I had the opportunity to really work with the scientific side and the business side, with capital investors and recruiting and hiring.”

When Martin Chapman of Indoor Biotechnologies talked about forming the Bio Hub, Hastings was onboard. Having just had her second child, she needed more flexibility than being a corporate executive officer could offer. For her, it’s a perfect fit.

“It’s been so much fun. I was afraid of losing the spark by doing something I loved full time, but it has been just the opposite,” Hastings said.

“I discovered I love the business aspect of it and I found I had more opportunities over time as I grew into the role,” she said. “It wasn’t that I had studied it, it all resulted from my saying yes to the opportunities when they came up.”