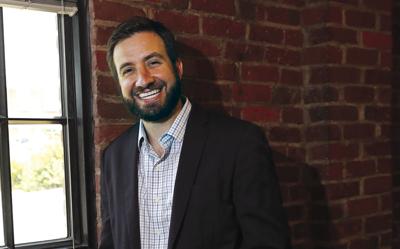 For a long time, Michael Straightiff wasn’t sure where he fit in college or the academic world.

Straightiff graduated from Case Western Reserve University’s bioengineering program surrounded by classmates who planned to go on to graduate, medical and law school. Now, he leads the University of Virginia’s Licensing & Ventures Group – the type of career he didn’t know existed in college but has allowed him to help doctors license inventions and professors start companies.

“The part I really liked was solving really big, meaty problems and there isn’t a bigger problem trying to commercialize early-stage academic research,” he said of what he enjoyed about engineering. “I am a naturally optimistic person, and you have to be naturally optimistic to do this job, because so many of the things fail. That also motivates me to find problems and push and solve and tweak and nudge.”

The UVa group helps patent and license university ideas and inventions, and then often tries to commercialize them into marketable products and successful businesses. In nearly a decade at UVa, Straightiff, who will turn 38 in July, has grown the group from one that focused mainly on patents to one that now operates an investment portfolio.

When he came on board in 2011 after six years at Case Western’s patent office and a brief stint at Virginia Tech, Straightiff wanted to expand the tools UVa used to commercialize its research, he said, and bring a “business-first” mentality to the program.

“Case was a good training ground for him,” said Patrick Klepcyk, who worked with Straightiff in Cleveland and then was recruited to join him at UVa. He is now director of licensing for the group. “He has a very proactive approach and doesn’t just wait for inventions to come in – he goes out and makes connections and helps people know what we do.”

Straightiff had seen Case Western’s program move early toward using transactional tools for commercialization and wanted to implement an investment fund at UVa. But it took time to get to know his new team, build trust among professors and staff, and demonstrate payoff. Still, he said, academics and doctors naturally want their work to be shared and used, so once he familiarized UVa with the group’s new processes, it wasn’t a hard sell.

“You only do the things you do because you hope they will make the world a better place, improve consumer behavior, help someone out,” he said. “That is our objective as well. I just use a slightly different set of tools and instruments than they use.”

In 2010, the year before Straightiff arrived in Charlottesville, the group – then known as UVa’s Patent Foundation – reported 139 invention disclosures, filed 121 patents and had 21 patents issued, registered four copyrights and completed 42 deals with companies. In 2018, the most recent report on file, the group reported 213 invention disclosures, 221 patents filed and 162 patents issued, completed 77 licensing deals and spun off three new ventures.

“He’s done a really good job getting support at the institutional level,” Klepcyk said. “And we are moving more and more to focusing on the quality of transactions, rather than just the quantity – though that’s up too.”

Finally, in 2015 UVa created the Seed Fund, managed by Straightiff’s group and responsible for investing in companies that are founded to commercialize UVa intellectual property or founded by UVa employees or students.

“Increasingly I believe universities are responsible to do all that we can to push our assets a little bit further into that divide so our industrial partners are slightly more inclined to pick them up,” Straightiff said.

Ruth Serven Smith is a reporter for The Daily Progress. Contact her at (434) 978-7254, rserven@dailyprogress.com or @RuthServen on Twitter.