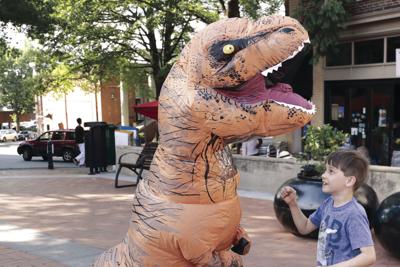 Just before last Christmas, 10-year-old Alston Richey was thinking about what he could do to make a difference. When most kids his age are thinking of the next video game to play, Richey had a business idea. And it involved a dinosaur suit.  So, his dad bought him one and with that, Alston is now owner, creative director and sole proprietor of the business venture CvilleSaurus, “your friendly neighborhood T-Rex.”

He is also young enough to warrant his own award category: 1 Under 20.

“People can hire me for birthday parties for kids ages three through six,” Alston said. “With my dinosaur suit, I entertain kids and I just charge $10.”

“Although I’m still waiting on my first official booking, I can’t wait to get out there,” he said. “All I want to do is make kids happy, because that’s what makes me happy.”

Alston knows, he feels, he can make this idea work.

“With my dad, I have been out with the suit quite a few times,” he said. “We walk across the Downtown Mall and kids absolutely love it. We also went to Whole Foods one day and that was also a big success.”

Wil Richey, Alston’s dad, a successful local entrepreneur, is proud of the entrepreneurial spirit of his son.

“He came up with this all on his own,” Wil Richey said. “He really wants to make a difference, and it says a lot about him as a person. He’s a sweet kid and smart as a whip.”

Alston, with help from his dad, got business cards printed and started his own YouTube channel, featuring the silly antics of CvilleSaurus.

“Right now, it’s all about getting me marketed,” Alston, who is a Greenbrier Elementary School student, said. “So I’m passing around as many business cards as I can and we go out with the costume so people have a chance to get to know me.”

With the videos on YouTube, and the occasional outing, Alston is getting a sense of what works and what doesn’t.

“I realized kids really like the silly stuff,” he said. “When I’m running, or falling down, it looks hilarious. And kids love that.”

Dad Will agrees and he and Alston are both involved in fine tuning the act.

Or, as Alston puts it, “I’m basically a clown in a dinosaur suit.”

If you are interested in hiring CvilleSaurus, please email: wilsonrichey@gmail.com