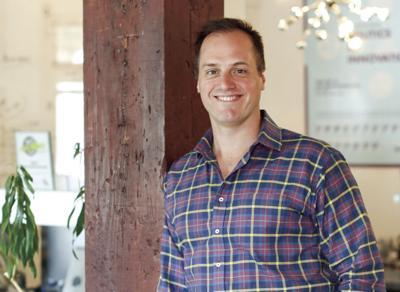 Paul Beyer found himself facing a question that countless young professionals across the country have asked themselves.

“Do you make your hometown a great place to live, or do you leave?” Beyer asked. “I wanted Charlottesville to be a really interesting place where a lot of ideas could emerge.”

Like many young professionals, Beyer wanted to live somewhere that had a vibrant arts scene, a business environment that encouraged start-ups and entrepreneurial approaches to problem solving, and housing close to the action that people just starting their careers could afford.

Taking a closer look at Charlottesville’s downtown area, Beyer realized that “it had an interesting cultural scene and an interesting start-up scene, but there was no central point where those ideas converged.”

Over the next month or so, Beyer held a series of conversations in his apartment. He invited entrepreneurs, musicians and creative types from diverse fields to discuss a pivotal question: “What do we want Charlottesville to become?” he said.

Beyer’s quest for answers eventually became the Tom Tom Festival. It is presented by the nonprofit Tom Tom Foundation, which “champions innovation, creativity and entrepreneurship in America’s hometowns.” It brings Charlottesville’s entrepreneurs, culinary stars, musicians, artists and thinkers together to talk about big ideas and how to make them happen.

“It perfectly symbolized what Charlottesville meant: this cultural hotbed in the small city,” he said.

The inaugural Tom Tom Festival was known at the time as the Tom Tom Founders Festival, in a nod to one of the area’s most famous residents. Renaissance man Thomas Jefferson shares Beyer’s birthday — and his wide-ranging interests in everything from a great meal to clever inventions to the arts. Its first outing was a success.

“In the opening year of the festival, we had a month of talks and workshops from biotechnology to wind power to the future of media,” Beyer said.

The month of events ended with a ticketed music festival, which Beyer calls “a financial disaster.” The free block party had lured curious and playful crowds who came for the rhythms and stayed for the fellowship and the vibe, but the more formally structured, traditional music festival didn’t quite fit.

“The first year, the things that were free and community minded were successful,” Beyer said. “So, the next year, we focused on it being a free community festival.”

Beyer soon realized that a festival based on innovation has to keep reinventing itself.

“Around 2015, we realized there needed to be a ticketed component,” he said. “When it was free, people didn’t value it.”

The solution was to keep the community-minded gatherings free, but to add a ticketed component for talking about big concepts and new visions for the future.

In the seven years since Beyer founded his festival, he believes Charlottesville has become a more appealing place for young people with big ideas. New venues have energized the downtown cultural scene, for example.

“In the last 10 to 15 years, I think, Charlottesville has developed a lot of venues — the Jefferson [Theater], the [Sprint] Pavilion, the Paramount [Theater] — on the Downtown Mall,” he said. “It really established a vibrant cultural scene in downtown Charlottesville.”

For recent graduates and young professionals who like what they see and hope to put down roots, entrepreneurial ventures are greeted with more enthusiasm and respect than in the past, he said.

“There’s a brewing sensibility that if you have a great idea, you can stay in Charlottesville,” Beyer said.

Finding a place to launch that idea, however, remains a challenge. High rents put downtown living out of reach for most young people.

“I think the affordability crisis in Charlottesville is a problem,” Beyer said. “There’s a whole generation of young people who would like to live downtown, but they can’t do it.”

Living over the store isn’t really an option, either. “We found this region has a 1.7% vacancy rate for businesses,” he said. “If you want to leave your living room or leave your garage and start a business and put your shingle out somewhere, there’s nothing available.”

Once again, Tom Tom evolved by addressing the questions that arose from previous questions and reflection. An examination of a sense of place grew into a discussion of affordability of the place itself and how community responses might change things. Is it possible to create an environment in which entrepreneurism isn’t seen as strictly the domain of the well off?

“Let’s foster a hometown where all kinds of ideas can grow,” Beyer said. “I think we have an increased sense of awareness and responsibility to focus on issues of equity.

“This year was a stellar example of trying to address racial disparities. Let’s have a city that is full of opportunities where dreamers can have big ideas and see them grow. Issues of race and equity are some of the most important conversations happening.”

This spring’s Tom Tom took the discussion deeper. What would Charlottesville look like if formerly incarcerated people could rejoin the workforce as employees, and eventually as business owners, and capitalize on overlooked potential? For Beyer, tackling such issues as a community can knock down limits and barriers of all kinds — starting with the “I can’t” mentality that can vaporize dreams before they’ve even fully formed.

“From the start, Tom Tom has been about giving people permission to dream big,” Beyer said.