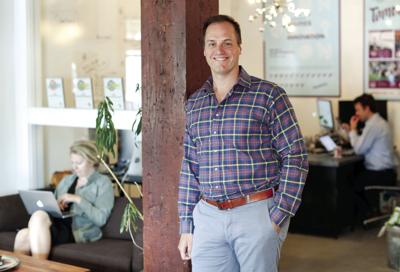 After traveling the world for 15 years, chef Antwon Brinson decided to settle in Charlottesville, but discovered a restaurant scene very different than what he was familiar with.

Brinson, 37, had learned culinary arts from a swath of places, most recently working in San Francisco. In all the places he had worked outside of Charlottesville, padding out the kitchen staff had been easy; people wanted to work at high-end restaurants, he said.

But while trying to fill a kitchen staff at Common House, Brinson said he ran into difficulties finding qualified candidates. Either because of perceived inability or a lack of experience, people were not applying, he said.

“There are a lot of people out here who want to work in restaurants but they don’t have the experience,” he said. “And the flip side of that is you have a lot of people who have been in the industry for a long time, five to ten years, and no one has really invested in them.”

Recognizing a need in the community, Brinson put together a plan to teach students the skills they would need to not only get a restaurant job, but to build a career as well.

Launching Culinary Concepts, a “culinary boot camp,” in partnership with the City of Charlottesville and Albemarle County in spring 2018, Brinson operated the five-week class out of the Charlottesville Albemarle Technical Education Center. Before long he took over the Cooking School space off Barracks Road, offering the program once a quarter.

Since starting the culinary boot camp in 2018, Brinson has taught 35-40 students the skills they need to work at high-end restaurants, skills he says are also applicable to life.

“Everything is designed to focus on the life skills,” he said. “The things that we teach people in the kitchen are things that everybody needs in their everyday lives.”

True to the boot camp name, Brinson said his classes are difficult and designed to build passion. The first couple weeks are structured to challenge students and have them come to terms with failure so he can build their skills up, helping create a well-rounded chef.

“When they leave here, I’m not necessarily producing the next top chef, but I’m giving you someone who is agile, open-minded and willing to learn,” he said. “My philosophy is that if you can stick to this, which is equivalent to a part-time job, I’ll get you a full-time job at the end.”

Brinson said his students have shown some incredible passion for culinary work and by the end of course emerge as not only competent chefs but more confident individuals as well.

It’s this confidence and passion that have inspired him to launch Positive Kulture Fest this summer. Planned to take place on July 21 in IX Park, the fest will feature several of Brinson’s former students creating dishes new and old that they want to serve to the public.

In addition to Postive Kulture Fest, Brinson said he will soon be implementing a GO Cook program at Albemarle Charlottesville Regional Jail, teaching inmates cooking skills and then providing job opportunities at three restaurants with which he’s partnered.