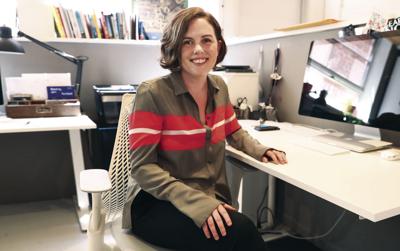 At age 33, Maureen Brondyke is gearing up for her tenth year as Executive Director of the New City Arts Initiative. Under her leadership and guidance, the arts collective has seen an incredible increase in revenue, participating artists and involvement from the community, with 5,000 people, on average, visiting the gallery on 3rd Street NE every year. For good reason, because Brondyke is convinced that a flourishing arts community has the ability to make any town a better place.

“I really, really believe in the impact the arts can have in helping to root people,” Brondyke said. “First and foremost, we strive to give artists a place to work and live. By doing that, we invest in social cohesion and civic engagement, and we facilitate a hospitable meeting place were strangers can become friends.  Artists can nourish the soul of a community.”

Brondyke, originally from Herndon, Virginia, went to UVa, where she was a Studio Art Major. After spending a year in New York City, she came to Charlottesville.

“After returning, I noticed there was a group of artists and congregation members from several congregations looking for ways to bring those groups closer together through the arts.

Without knowing it at the time, those early conversations would lay the groundwork of what would become the New City Arts Initiative. By 2010 she was founding director of the nonprofit, fostering engagement with the arts in Charlottesville.

By building relationships with other organizations, art galleries and artists, Brondyke was able to build a large network and build a meaningful community around the arts.

“Looking back on the past nine years, what stands out the most for me is that we have created a sense of community around the gallery. That’s just amazing to see happen.”

Facilitating artists, so they can hone their craft and have a space to exhibit their work has always been the main motivator for Brondyke.

“In the past nine years, over 200 artists have exhibited their work, and we have housed 20 studio residents. We have also seen over $100,000 of direct support artists have received from gallery sales and around $25,000 in grant funding support,”

The support for artists happens through different initiatives, Brondyke explained. One such an initiative is Charlottesville Soup, where artist have a chance to secure grant funding for a project of their choice.

“Charlottesville Soup happens twice a year and people give a $10 donation for a meal with soup, bread, salad, desert and a vote. During the dinner, four artists will present a project in need of funding. At the end of the dinner, participants cast their vote and the winning artist receives a $3,000 grant for their creative project.”

Throughout the year, artists connected to the gallery give free workshops, participate in lecture series and partner with organizations in town in an effort to showcase their work in unexpected places.

“We have a close working relationship with The Haven. Through the housing program there, we give a stipend to an artist to supply art pieces for homeless people who get their own place. In partnership with The Haven, New City Arts provides a stipend to Haven housing clients to spend on artwork and furnishings, and artists receive the funding if the client chooses to commission them or buy work from them.

By being creatively involved like that, artists have a chance to make an impact for the better.”

Another example is of a former incarcerated artist, who visited the juvenile detention center to give a talk about his art, Brondyke explained.

All that is to say that there’s more that meets the eye when it comes to the gallery just off the Downtown Mall. By cultural participation like workshops, family-friendly events, art exhibits and collaboration with organizations in town, The New City Arts Initiative’s reach is much broader than one might expect.

“With everything we do and all the programs we offer, we facilitate a vibrant arts environment, an ecosystem where everyone who wants to can benefit.”

For the future, Brondyke doesn’t want to make her organization any bigger than it needs to be.

“We are in a great place. We want to keep giving artists in Charlottesville a place to work and live, and by doing that support cultural participation.”

Brondyke is reminded by a quote from one of her peers in the arts community, to emphasize just how important the arts can be for a community.

“He said that if you want to increase foot traffic and economic development, you build a stadium. If you also aim to create more stable communities, drive social cohesion and increase civic engagement, you open an art gallery.”